The Border Roads Organisation (BRO) has raised its benchmark of excellence yet again by extending access of the formidable Zojila at an altitude of 11,649 ft, that links the Union Territory of Ladakh with the rest of the country. For the first time Zoji mountain pass remained open beyond 31st December.

The BRO achieved this feat through its frontline Projects – Vijayak and Beacon. They are collectively responsible for maintaining the axis that has strategic implications, in addition to the socio-economic well-being of Ladakh. Last year the same was extended till 31st December 2020, the BRO silently but surely embarked on the journey to better its own record by reorganising and adding a few more snow clearance detachments and augmenting them with the state-of-the-art snow clearance equipment. The results of the planning and efforts are for all to see, having achieved the feat which hitherto was considered impossible by many.

In the first three days of 2022, about 178 vehicles have been able to transit through the pass by the collective assistance of the BRO and the Police personnel. The numbers are considered significant because with the temperatures plummeting to Minus 20 degree centigrade, the road is subject to extreme frosting with blizzard like conditions, which can lead to accidents. Thus, besides snow clearance, the axis is subjected to maintenance on a daily basis to keep it road worthy, which is achieved by the relentless and selfless efforts of the Karamyogis of BRO. 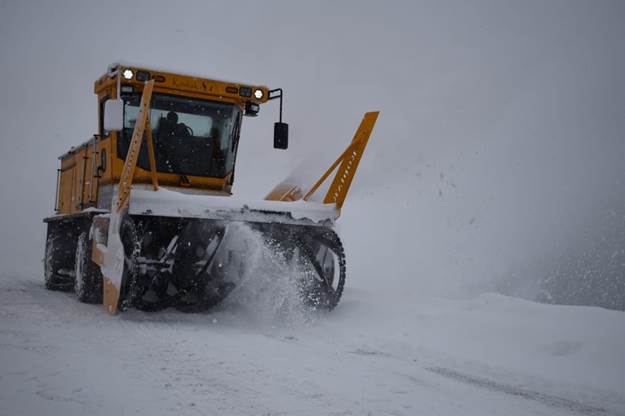